Public Atheist Monument Across from 10 Commandments

Public Atheist Monument Across from 10 Commandments

Dueling monuments will soon be a sight to see in a small courtyard in front of a courthouse in Bradford County in Starke, Florida. Across from a six ton, ten year old display of the 10 Commandments, an atheist group will be erecting a smaller, but significant, 1,500 pound granite monument of their own. 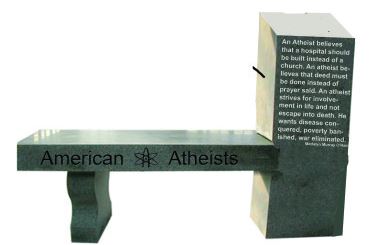 The bench like monument will feature quotes from secularists the likes of Benjamin Franklin and Thomas Jefferson and it will include a quote from the Treaty of Tripoli, a 1796 peace agreement between the U.S. and North African Muslims:

The United States of America was not founded on the Christian religion!

The structure will also have the following quotes inscribed on it.

American Atheists and ACLU are stirring up controversies over the display of the 10 Commandments in courthouses elsewhere, and in public schools in Oklahoma and Pennsylvania too.

Personally, I think that this is very creative and a fair compromise, as it concerns public property and free speech. I would rather see dueling signs, monuments and exhibits, than see religious displays constantly under legal attack, creating even more conflict between the religious community and the secularists.

I don't support, however, the 10 Commandments or any other piece of religious indoctrination in public schools or inside public courthouses. I do support legal action to have those displays removed altogether, as they represent a governmental endorsement of religion. There is no room for a government endorsed religion in our schools, our courthouses or our legislative halls.

Right on and congratulations on your win American Atheists!